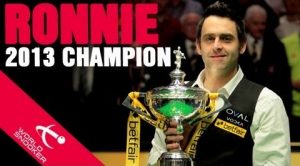 The 2013 World Snooker Championship took place from 20 April to 6 May 2013 at the Crucible Theatre in Sheffield, England.

Despite having played only one competitive match all season, defending champion Ronnie O’Sullivan did not lose a session in the tournament.

He defeated Barry Hawkins 18–12 in the final to become a five-time World Champion, joining Steve Davis and Stephen Hendry as the only players ever to defend their titles.