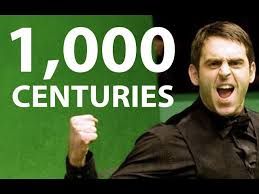 In snooker, a century break (sometimes referred to as a ton) is a score of 100 points or more within one visit at the table without missing a shot and requires potting at least 25 consecutive balls.

The ability to score century breaks is regarded as a mark of the highest skill in snooker, while the first career century has been described by Ronnie O’Sullivan as the “ultimate milestone for any snooker player”.