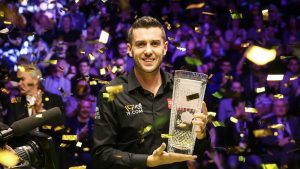 On 29 April 2015 World Snooker chairman Barry Hearn announced that the event called English Open will be held for the first time in 2016 in Manchester, England, as part of a new Home Nations Series with the existing Welsh Open and new Northern Ireland Open and Scottish Open tournaments.

The winner of the English Open is awarded the Davis Trophy which is named in honour of former World Champion Steve Davis.