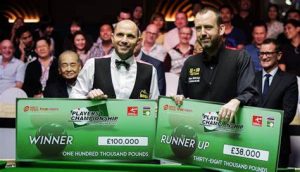 The series concluded with a Grand Final, where qualification was based on performance in the other PTC events, and had the status of a full ranking tournament.