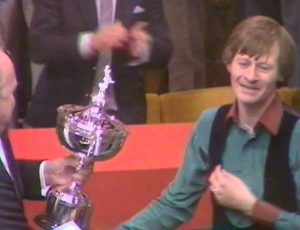 Old rivals Alex Higgins and Terry Griffiths, as well as fresh-faced challenger Jimmy White, tried to halt what was quickly becoming the Steve Davis express train throughout the 1981/82 snooker season.

After winning the world championship Higgins should have ended the 1981/82 snooker season world number one, but he was deducted ranking points for disciplinary reasons..