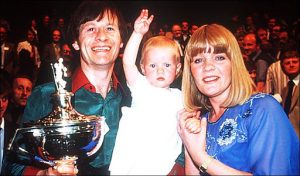 The 1982 World Snooker Championship took place between 30 April and 16 May 1982 at the Crucible Theatre in Sheffield, England.

Higgins reached the final after an epic 16–15 semi-final victory over Jimmy White. Trailing 14–15, and 0–59 down in the 30th frame, Higgins saved himself with a memorable clearance of 69 and then won the decider.

In the final Higgins beat Reardon 18-15.