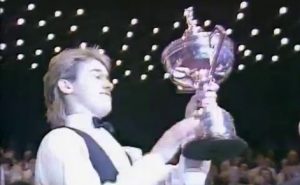 The 1990 World Snooker Championship was contested by Stephen Hendry and Jimmy White.

Hendry led 9–7 after the first day’s play and won the first four frames of the second day to lead 13–7, before White reduced the gap to four frames. At 16–12, Hendry compiled breaks of 81 and 71 to win the match 18–12, claiming his first world title. He became the youngest-ever world champion at the age of 21 years and 106 days