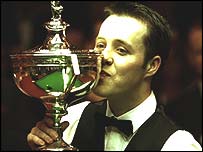 Doherty became another World Champion who fell to the Crucible curse and could not defend his first World title. However, Doherty has come closer than any other first-time champion bar Joe Johnson to retaining his championship.