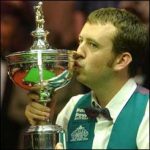 Having won the UK Championship and the Masters earlier in the season, Williams held all three Triple Crown titles simultaneously.

The defending champion, Peter Ebdon, lost 12–13 to Paul Hunter in the quarter-finals.