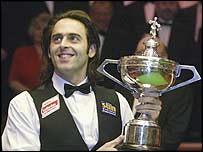 Ronnie O’Sullivan won his second world title by defeating Graeme Dott 18–8 in the final of the 2004 World Snooker Championship, this despite Dott having led 5–0.

This was the fourth biggest margin in a World final.

Mark Williams was the defending champion, but he lost in the second round 11–13 against Joe Perry.