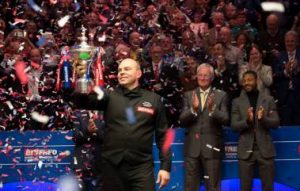 Stuart Bingham beat Shaun Murphy the 2005 winner in the final.

Bingham, a 50–1 outsider at the start of the tournament, defeated Murphy 18–15 in the final to win the first world title of his 20-year professional career. At the age of 38, Bingham became the oldest player to win the title since Ray Reardon in 1978.