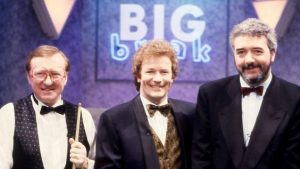 Big Break was compulsive viewing for snooker fans of all ages during the 1990s and early 2000s.

The light-hearted BBC game show was fronted by comedian Jim Davidson with the assistance of John Virgo.

Members of the public were teamed up with professional snooker players. YouTube is a treasure trove for anyone yet to watch the mayhem that usually followed.