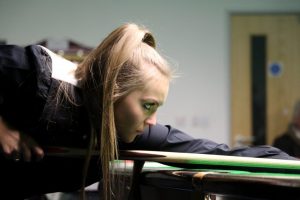 Emma Parker (born 24 April 1999) is an English snooker player. She was ranked number one in the women’s world snooker under-21 rankings as of April 2019.

Parker started playing pool at the age of four, and turned to snooker at the age of 15 after her father and uncle took her to Romford Snooker Club.

In April 2017, she won the Under-21 Ladies World Championship at the Northern Snooker Center in Leeds.