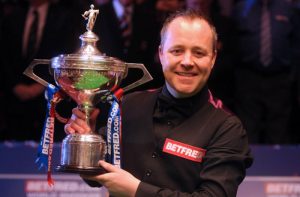 John Higgins, MBE (born 18 May 1975) is a Scottish professional snooker player. Since turning professional in 1992, he has won 30 ranking titles, including four World Championships and three UK Championships, as well as two Masters titles, making him one of the most successful players in the history of the sport.

Known as a prolific break-builder, he has compiled more than 750 century breaks in professional tournament play.