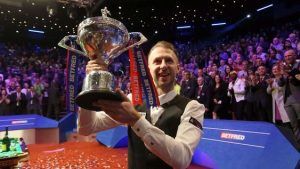 Judd has won all the Triple Crown events at least once, he has won a career total of 22 ranking titles.

In the 2019–20 snooker season Trump has won six ranking tournaments, setting a new record for the most ranking titles in a single season. He has compiled more than 800 century breaks in professional competition.