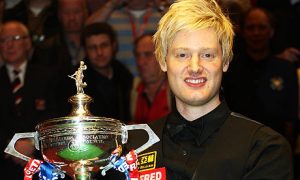 Neil Robertson (born 11 February 1982) is an Australian professional snooker player. He won the 2010 World Championship and was the world number one later in the same year.

Robertson is the only Australian to have won a ranking event, and was undefeated in his first six televised finals.

Robertson has compiled more than 700 century breaks in professional competition. During the 2013/2014 season he became the first player to make 100 centuries in a single season.