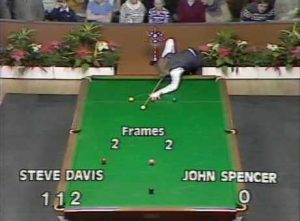 At the Classic in January 1982, Steve Davis achieved the first maximum in professional competition.