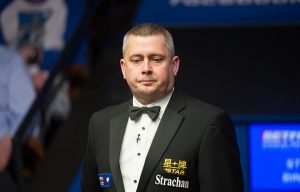 Born in Newport, Wales, Collier began refereeing on the professional snooker circuit in 1992.