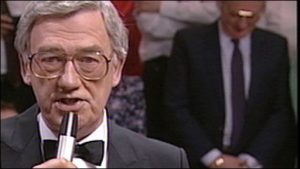 David Vine was the first anchorman at the World Snooker Championships at the Crucible Theatre, Sheffield, from 1978 – the first year the BBC covered the championships daily – until his retirement in 2000.

BBC’s Hazel Irvine is now the most well know presenter of snooker on TV. Every World Championship since 2001 she has teamed up with colleagues John Parrott and Steve Davis.