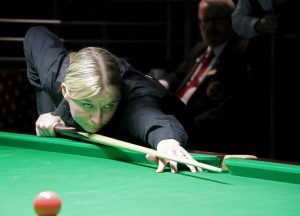 Rebecca Kenna (born 11 January 1989) is an amateur snooker and billiards player from Keighley.

Kenna started playing on the women’s snooker circuit in 2016, and reached the semi-finals of the world championship at her first attempt.

She ended her first full season ranked sixth and recorded a victory over multiple world championship title holder Reanne Evans in the course of reaching the final of the 2017 Connie Gough Trophy.