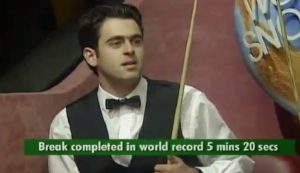 The first officially recognised maximum break was made by Joe Davis in a 1955. In 1982, Steve Davis achieved the first recognised maximum in professional competition. The following year, Cliff Thorburn became the first player to make a maximum at the World Snooker Championship.