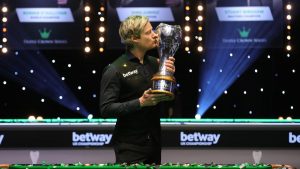 The UK Championship is a professional ranking snooker tournament. It is one of snooker’s prestigious Triple Crown events.

It is the second-biggest ranking tournament, after the World Championship.

Ronnie O’Sullivan has won the tournament a record seven times, followed by Steve Davis with six titles and Stephen Hendry with five.