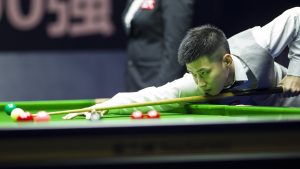 Zhao Xintong (born 3 April 1997) is a Chinese professional snooker player, widely considered one of the most promising upcoming snooker talents.

In 2013, at the International Championship, Zhao beat six-time World Champion Steve Davis 6–1 who later commented: “This boy was astonishingly good and better than anybody I have ever seen at that age.